How Shannon is honoring her grandpa’s memory

Shannon Fojtik lost her grandfather to prostate cancer on June 15th, 2013. Colonel Craig Wood was, as Shannon says, “humble, brave, smart, funny, and caring — just an incredible human being.” After he was diagnosed with an aggressive form of prostate cancer, Shannon knew she had to get involved to help her grandpa, and others like him. She dove in headfirst to the fight against prostate cancer: Making shirts and selling them, posting on countless social to spread awareness, and working with the student council at her school to help hit her goals. 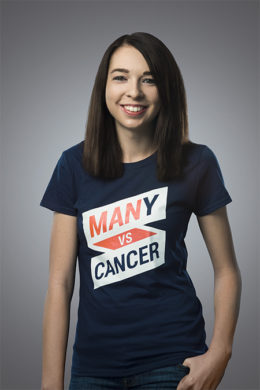 “I think that what was fueling my want to help fund and end prostate cancer was the thought that if I succeeded, my grandpa would somehow be alright.“

When Colonel Wood passed away, Shannon became even more resolved to make an impact — she is tireless in her determination to stop other granddaughters and families from experiencing the same loss she did. Her grandpa was dedicated to helping those around him, and Shannon’s honoring his memory by doing the same.

“I don’t think there will ever come a time when I don’t cry when I think about his voice or smell his cigars or see his smile in pictures. So I will not stop until cancer is no longer a threat and people are no longer dying simply because they were unlucky.“

The truth is, right now in the U.S., 1 in 8 men will be diagnosed with prostate cancer — that’s a diagnosis every 3.3 minutes. And every 20 minutes, a man dies from this disease. But we’re also at a turning point in the science that will cure it. Scientists have identified 19 prostate cancer genes and are rapidly developing precision treatments to target these genes. With enough support to fund their research, a cure is within reach.

Learn how to join Shannon and help fund a cure for prostate cancer at https://join.manyvscancer.org/group/grandchildren.