A great day to be alive

Julie Baisinger was one of the first to join Many vs Cancer. Like so many, she lost a loved one to prostate cancer — and now she’s part of the fight to make sure we find a cure for this disease that affects millions of families across the country. 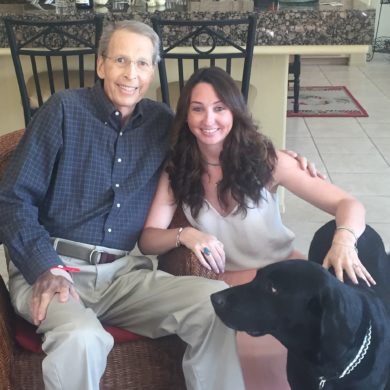 Here’s Julie’s story in her own words:

If you look up the word “fighter” in the dictionary, you’ll see a picture of my dad.

He went from fighting in Vietnam to fighting alongside my mom during her battle with cancer. After losing her in 1997, he raised my brother and me as a single parent. And then in 2013, Dad took on his greatest fight: prostate cancer.

Through it all, Dad managed to wake up every single day with a smile on his face and an amazing outlook on life. Even through his last few months when the chemo and radiation really started taking a toll, when you walked into the room, he’d smile and say, “Today is a great day to be alive.”

I try to live my life every day with this same positive spirit — and now, in Dad’s memory, I’m taking it a step further by raising funds to help scientists defeat prostate cancer once and for all.

As Dad was nearing the end of his fight with prostate cancer, I realized he wasn’t going to make it to my wedding day. So my husband Scott and I decided to change our plans and got married right there in Dad’s living room. It really was a great day to be alive.

Dad passed away 10 days later, and now I’m fighting in his memory — just like he would have wanted me to — with Many vs Cancer.

Together, we can defeat prostate cancer in honor of all the dads, daughters and families out there who are fighting this disease together.

— Julie Baisinger, Many vs Cancer supporter

Learn more about how you can join Julie and fund a cure for prostate cancer with Many vs Cancer.