Marathon runner races for a cure

Randy Kam has run more than 190 marathons, but his greatest challenge was something he never expected.

In October 2014, the day after he finished the Long Beach Marathon, Randy visited a doctor for a routine PSA test. A normal score is under 4; Randy’s PSA was 550. After several follow-up tests, the diagnosis was clear: Stage IV prostate cancer. When Randy got his official diagnosis in January 2015, his PSA had risen even further to 840, and the cancer had spread to his lymph nodes. Surgery wasn’t an option, so he began a grueling regimen of 15 chemotherapy sessions. 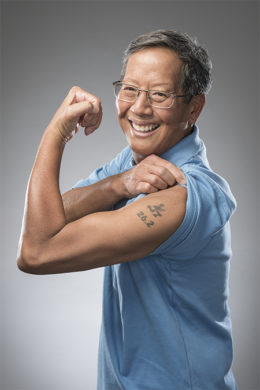 Still, Randy refused to let cancer control his life — or his love of running. He completed six marathons in 2015, two of which he ran only three days after chemotherapy. And he hasn’t slowed his pace since then. Now 59 years old, Randy continues to run. He ran 12 marathons and summited Mount Baldy in 2016, and has already run three marathons in 2017.

While running has always been a form of stress relief for Randy, he now uses it to raise money for cancer research and foster greater awareness about screening. During races he wears a sign on his back sharing his diagnosis and encouraging fellow runners to get their PSA checked.

Randy still undergoes hormone therapy treatments, and his PSA has fallen to 0.3. Despite all the setbacks, he’s living life to the fullest. His positivity and endurance make him a remarkable role model for men everywhere: one of the Many racing to bring about the end of prostate cancer.

Keep running, Randy — and inspiring others to keep fighting their own battles against prostate cancer